ABC's "Supermarket Sweep" Partners With Valpak to Give One Lucky Winner The Chance to Win $5,000 Grand Prize 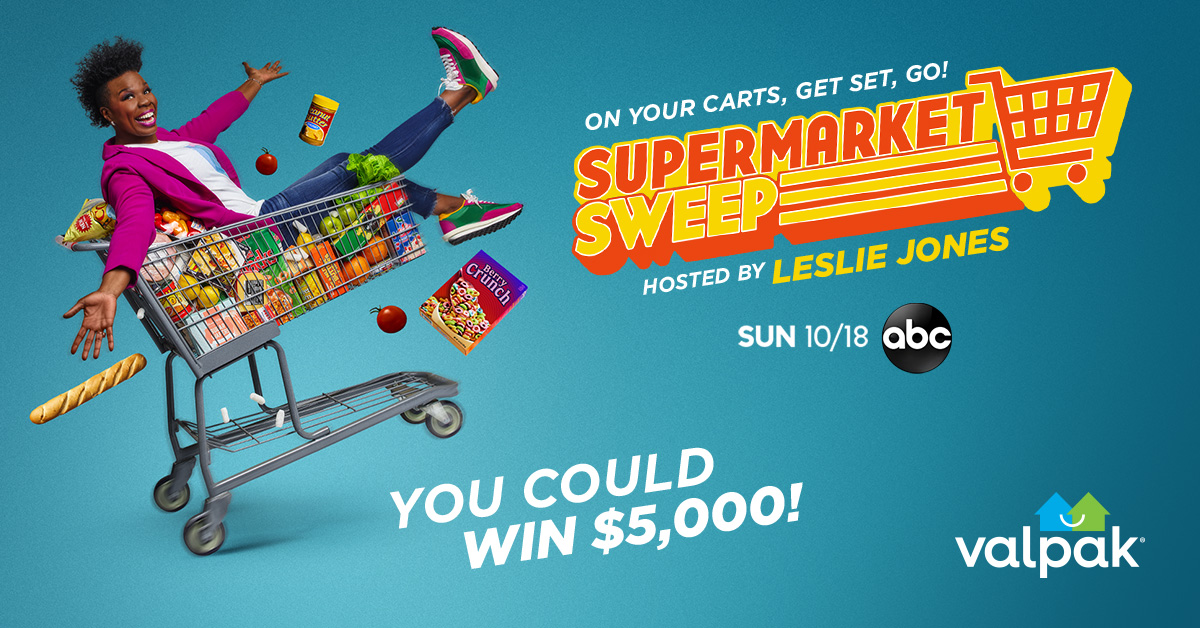 ABC has also partnered with Valpak for a "Supermarket Sweep"-themed takeover of their October monthly mailer. The cover of the envelope and a corresponding insert will announce the return of the game show and Valpak will give consumers the chance to play along as they race inside to see if they are one of the lucky winners of a $100 check! Additionally, fans can enter Valpak's sweepstakes for a chance to win $5,000 to put towards their grocery bills! No purchase is necessary to enter, and full rules and details are available at http://www.valpak.com/SupermarketSweep.

Hosted and executive produced by Emmy® Award-nominated comedienne and actress Leslie Jones, "Supermarket Sweep" will premiere SUNDAY, OCT. 18 (8:00-9:00 p.m. PDT), on ABC. The fast-paced and energetic series follows three teams of two as they battle it out using their grocery shopping skills and knowledge of merchandise to win big cash prizes. The original format aired on ABC from 1965-1967 and went on to become a global sensation. It was adapted in 13 international territories and, most recently, relaunched in the UK. "Supermarket Sweep" is produced by Fremantle. Executive producers include Leslie Jones, Hunter Seidman and Jennifer Mullin, Alycia Rossiter and Wes Kauble.

About Valpak
Based in St. Petersburg, FL, Valpak is one of the leading direct marketing companies in the U.S. We provide print and digital advertising through a network of roughly 140 local franchises. From mailbox to mobile phone, Valpak brings exciting local business offers and opportunities to millions of consumers. Each month, our well-known Blue Envelope of Savings is mailed to nearly 37 million demographically targeted households in 43 states. Our digital suite of products, including valpak.com, reaches more than 110 million users. Visit valpak.com for more information.

ABC programming can also be viewed on demand and on Hulu.

*COPYRIGHT ©2020 American Broadcasting Companies, Inc. All photography is copyrighted material and is for editorial use only. Images are not to be archived, altered, duplicated, resold, retransmitted or used for any other purposes without written permission of ABC. Images are distributed to the press in order to publicize current programming. Any other usage must be licensed. Photos posted for Web use must be at the low resolution of 72dpi, no larger than 2x3 in size.