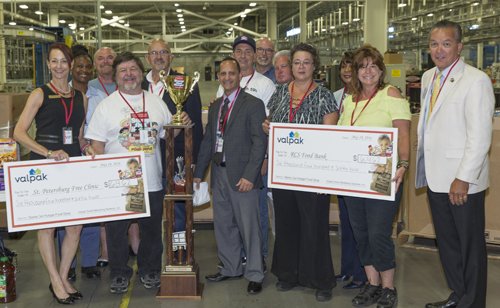 (ST. PETERSBURG, FL May 11, 2016) — Valpak, a leader in local print and digital coupons, announced its employee food drive collected 12,924 pounds, or more than 6 tons, of food, enough to feed 400 families. This triples last year's donations. One dollar per pound was also matched by the company to make a monetary contribution. The food and checks were donated and presented to two local food banks, the St. Pete Free Clinic and the RCS Food Bank, during the employee rally held Tuesday morning.

Over the past 13 years, Valpak has supported the National Association of Letter Carriers' (NALC) Stamp Out Hunger food drive initiative to tackle the widespread problem of hunger across America. Valpak held a total of 17 events over the course of eight weeks to raise money and food donations. Employees celebrated efforts with a final weigh-in rally on Tuesday to announce food collection results from its 700 employees.

"We could not be more pleased with the incredible success of this year's food drive," said Michael Vivio, president of Valpak. "These record breaking numbers don't just reflect the company's commitment to giving back to the community, but also each employee's personal dedication and passion to give to those in need. Hunger, particularly among children and the eldery, is a serious issue in our communities."

Valpak also printed more than 120 million postcards for the national food drive campaign and sent those to homes across the country. The postcards asked residents to help feed needy families in their community by donating food on Saturday, May 14, which is when the NALC conducts its annual food drive. The national campaign was also promoted on 36 million Valpak blue envelopes sent to homes over the past month. The Stamp Out Hunger food drive is the country's largest single-day food drive. On that day, the nation's 175,000 letter carriers will collect donations left by residents near their mailboxes as usual mail delivery is made. The food is then brought to a central location where local food banks, pantries or shelters pick up their portions of the donation.

"Valpak really is a key partner for Stamp Out Hunger," said Al Friedman, president of the NALC in Florida. "Without their help, the huge national success of this food drive simply would not be possible - it's really unbelievable!"

About Valpak
Based in St. Petersburg, FL, Valpak is one of the leading direct marketing companies in the U.S. and Canada. We provide print and digital advertising through a network of 160 local franchises. From mailbox to mobile phone, Valpak brings exciting local business offers and opportunities to millions of consumers. Each month, our well-known Blue Envelope of savings is mailed to about 39 million demographically targeted households in 45 states and in four Canadian provinces. Our digital suite of products, including valpak.com, reaches more than 110 million users. Founded in 1968, Valpak is owned by Cox Target Media, a subsidiary of Cox Media Group in Atlanta.